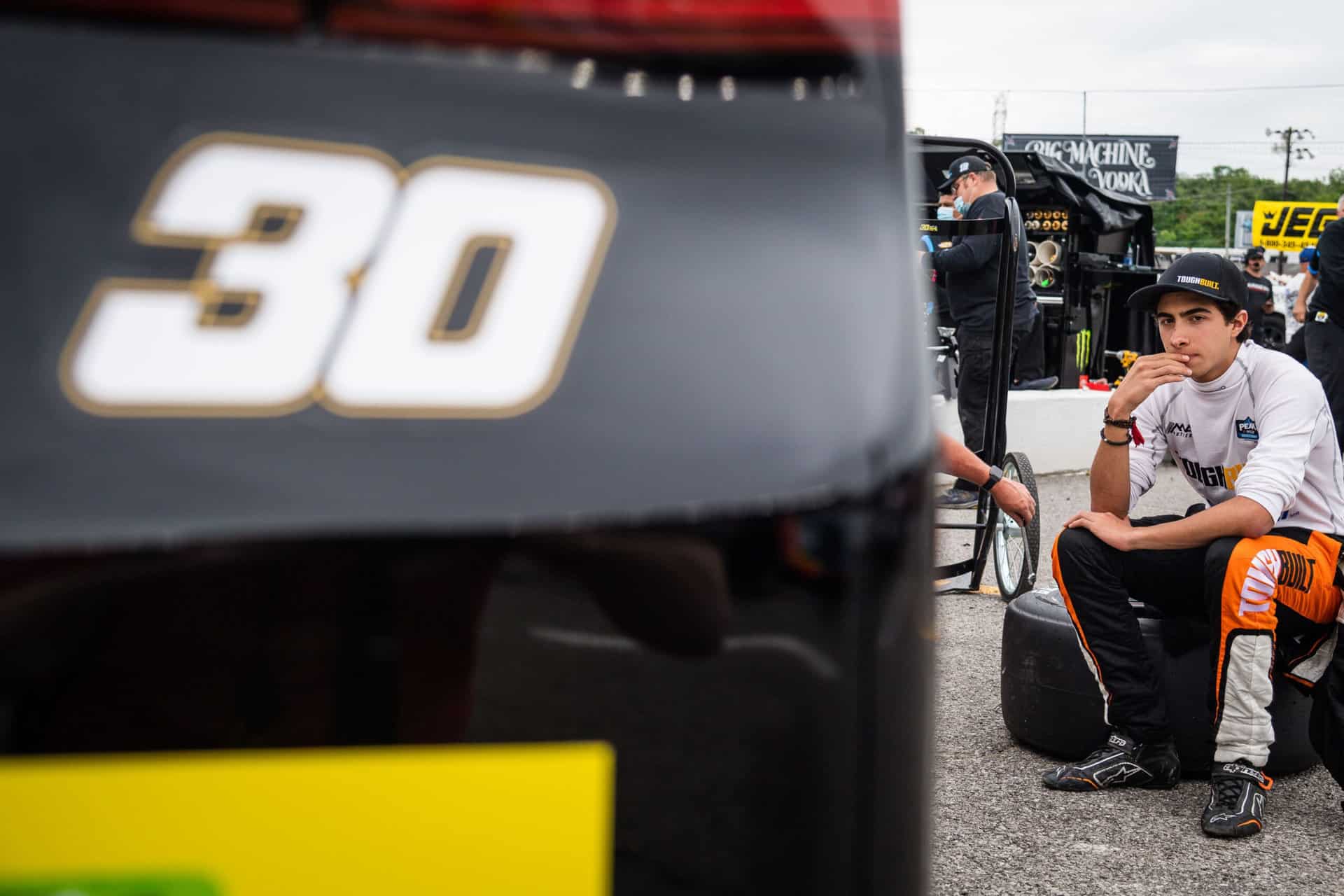 And with one top-five and three top-10 finishes in the opening three races of the 2021 season, Gutiérrez and his Mark Rette-led team know they need a top-five finish in the fourth race of the year in order to keep their championship hopes alive.

In the series’ most recent race at Fairgrounds Speedway Nashville, Gutiérrez qualified 10th in his No. 30 TOUGHBUILT Ford Fusion and progressively got better throughout the 200-lap race to finish ninth.

While the effort was the team’s worst run of the 2021 season, Gutiérrez and Rette both believe they have what it takes to surge forward and land the Mexico City, Mex. driver back in Victory Lane.

“Nashville went OK, the tire issue really held us back from finishing better,” said Gutiérrez. “We made gains and finished better than what we started but I don’t think we left Nashville feeling good. We left there feeling motivated heading to Dover this weekend knowing we need to go there and have a performance like we did at New Smyrna.

“That’s not going to be easy though. I’ve been told that Dover is a beast. It will be like nothing that I have raced in my life – but I’m ready to accept the challenge and I’m just thankful I have Mark (Rette) and the Rette Jones Racing team on my side.”

To keep Gutiérrez fresh in the seat and continue to enhance his learning curve, he participated in the open test at Charlotte (N.C.) Motor Speedway on Monday night with the RJR team where he ended up sixth fastest overall.

“The Charlotte test was a good boost for me,” added Gutiérrez. “Mark and the RJR boys brought me a fast car and I liked the speed and finesse that Charlotte demands. Without a doubt, the faster speeds should help me get better prepared for Dover this week.”

Knowing track time is critical to his Dover success, the 18-year-old knows taking advantage of any track time prior to the green flag will be valuable.

“Track time is critical for any rookie driver like me,” he said. “I just have to trust the setup that Mark has put underneath and trust the guidance of him and my spotter and just believe that it will all work out. I’ll let you know what I think about Dover after practice,” he chuckled.

22 points behind championship points leader Sammy Smith in the ARCA Menards Series East champion standings, Gutiérrez realizes with a win in the bank, the bigger picture is still a priority.

“We want to win again, but if that opportunity doesn’t present itself, we don’t need to put ourselves in a spot where we give points away and take us out of the championship. Race four is on the table this weekend, but we are points racing. There is not room for error and a lot more to be lost than gained. Hopefully, we leave Dover on Friday night in a much better place than when we left Nashville.”

Set for his fifth career ARCA East start, Gutiérrez knows without support, this weekend would not be possible.

“I cannot thank my partners TOUGHBUILT, TekNekk, Telcel (Jimmy Morales) and Avaya enough for this chance to fight for another win and of course for Rette Jones Racing for the opportunity to drive their race cars.

“Three races in, I know we have turned heads, but we cannot afford to get complacent and just have to remember what is at stake for everyone involved.”

Rette says he’s proud of Gutiérrez’s initiatives and believes they can be in the hunt for the third career win for RJR.

“A rookie season is tough in the ARCA Menards Series, but Max has excelled and done a great job,” added Rette. “I know that Nashville wasn’t what we wanted but we still came out of there with the car in one piece and a lot of laps earned for him. Dover is called the “Monster Mile” for a reason, but I think we can go there and conquer the track and really put us back in this championship fight.”

The General Tire 125 (125 laps | 125 miles) is the fourth of eight races on the 2021 ARCA Menards Series East schedule. A combined practice and qualifying begins for the one-day show on Friday, May 14 from 1:45 p.m. – 2:55 p.m. The event will take the green flag just after 5:00 p.m. with live television coverage on TrackPass on NBC Sports Gold and SiriusXM Channel 391 (Online and the SiriusXM App: Channel 981). All times are local (ET).

TOUGHBUILT is an advanced product design, manufacturer and distributor with emphasis on innovative products. Currently focused on tools and other accessories for the professional and do-it-yourself construction industries.

We market and distribute various home improvement and construction product lines for both the do-it-yourself and professional markets under the TOUGHBUILT brand name, within the global multibillion dollar per year tool market industry. All of our products are designed by our in-house design team.

Since launching product sales in 2013, we have experienced significant annual sales growth.

Our mission is to provide products to the building and home improvement communities that are innovative, of superior quality derived in part from enlightened creativity for our end users while enhancing performance, improving well-being and building high brand loyalty.

Additional information about the company is available at: toughbuilt.com.