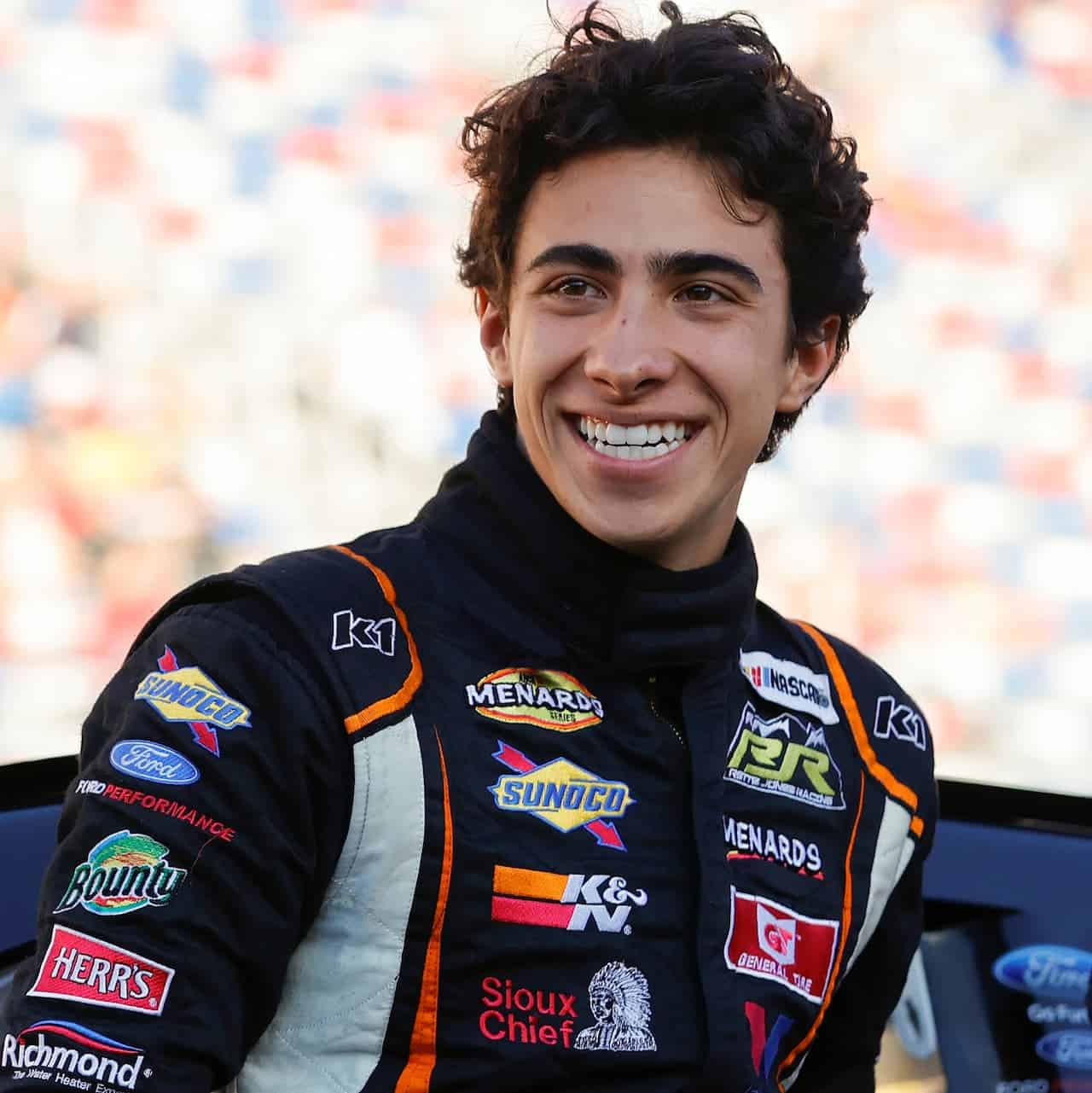 The former NASCAR Mexico Challenge Series champion invaded the ARCA Menards Series East last February with little experience but a domineering presence and a methodical approach in the Jeep Beach 175.

Studying his competition throughout the night proved to be a blessing as the Rette Jones Racing development driver took advantage of a green-white-checkered restart to snicker Joe Gibbs Racing’s Sammy Smith and David Gilliland Racing’s Taylor Gray on the bottom lane coming to the checkered flag and edging his competition by 0.046 seconds to win the race in just his third career start.

Reflecting on the memories and blessings that the Feb. 8 race brought to his Mark Rette and Terry Jones owned race team, Gutiérrez returns to New Smyrna in the No. 30 TOUGHBUILT | TekNekk | Distributed Ledger Inc. (DLI) Ford Fusion confident of defending his race title in Tuesday night’s Race to Stop Suicide 200 presented by Place of Hope.

“I am incredibly blessed for this opportunity to come back to New Smyrna and keep that checkered flag within the Rette Jones Racing walls,” said Gutiérrez. “I could not have asked for a better way to start our season last year other than the dramatic fashion we delivered.

“I learned a lot last year running full time in the ARCA Menards Series East and I think that experience will only add to the hustle on Tuesday night.”

While Gutiérrez has a busy season of racing ahead, his 2022 schedule won’t consist of the ARCA Menards Series East championship. Instead, a more diverse ARCA schedule this season will allow the Mexico City, Mex. Native to challenge for wins while continuing to improve his race craft.

“We aren’t racing for points on Tuesday night, but we are racing for that trophy,” added Gutiérrez. “The dynamics of our situation will allow me to be more aggressive on Tuesday night, but I also know that if I want a shot at my second career ARCA Menards Series East victory, I need to keep the fenders intact and be around in the end – like I was last year.”

“We didn’t have the best car at the start of the race, but we all remained calm and Mark made some great adjustments throughout the race and we were able to capitalize when it counted most. It’s important for me to remember all of that not only leading up to the race – but even during the race too.”

“There aren’t words to describe what the Daytona race will mean to me,” sounded Gutiérrez. “Daytona I feel like is every race car driver’s dream and mine is coming true. Our No. 32 TOUGHBUILT car was fast in preseason testing and I think we’ll be easily able to back up the speed throughout practice and qualifying.

“I can’t predict what will happen in the race, but I will do my best to execute a flawless race. While the tracks are on the complete opposite end of the spectrum, you must be in a place to finish first. I cannot thank TOUGHBUILT, TekNekk, Distributed Ledger Inc. (DLI) and GoGig enough for their support of these two races.”

GoGig in fact is increasing its commitment to Gutiérrez and the RJR team in 2022.

“GoGig is proud to sponsor Max Gutierrez and the TOUGHBUILT car at the Lucas Oil 200 at Daytona,” offered Chris Hodges, founder and CEO of GoGig.

“GoGig’s founding principle was to remove bias and promote diversity + inclusion in the hiring process for job seekers by allowing them to remain anonymous. The entire GoGig team couldn’t be prouder to represent Max and his Hispanic heritage in the same manner at Daytona this weekend.”

Rette is thrilled to have Gutiérrez back under the Rette Jones Racing umbrella in 2022.

“Max did a terrific job for Rette Jones Racing and we are looking forward to hopefully starting off the 2022 race season – much like we did the 2021 season with a trip in Victory Lane,” he said. “But, there is a lot of great things on the horizon not only for Max but the Rette Jones Racing team as a whole.

“Max knows how to get around New Smyrna and with over 200 laps on the track, the track should prove to be extremely beneficial once again on Tuesday night. Saturday afternoon will be a historic moment for Max and I’m just glad to be a part of it.”

The Race to Stop Suicide 200 presented by Place of Hope (200 laps | 100 miles) is the first of seven races on the 2022 ARCA Menards Series East schedule. Practice begins for the one-day show on Tuesday, February 15 from 3:30 p.m. – 5:00 p.m. The results of practice will dictate the starting grid for the season-opening race. The event will take the green flag just after 7:30 p.m. with live television coverage on FloRacing and taped delay coverage on the USA Network.

The Lucas Oil 200 driven by General Tire (80 laps | 200 miles) is the first of 20 races on the 2022 ARCA Menards Series schedule. Practice begins Thurs., Feb. 17 with a fifty-minute session from 4:05 p.m. – 4:55 p.m. Group qualifying is set for Fri., Feb. 18 at 1:30 p.m. The season-opener for the 70th consecutive ARCA season is set the following afternoon on Feb. 19 to take the green flag shortly after 1:30 p.m. The event will be televised live on FOX Sports 1 (FS1) with the Motor Racing Network (MRN) handling the radio waves. ARCARacing.com will also stream live timing and scoring throughout the entire weekend festivities.

TOUGHBUILT is an advanced product design, manufacturer and distributor with emphasis on innovative products. Currently focused on tools and other accessories for the professional and do-it-yourself construction industries.

We market and distribute various home improvement and construction product lines for both the do-it-yourself and professional markets under the TOUGHBUILT brand name, within the global multibillion dollar per year tool market industry. All of our products are designed by our in-house design team.

Since launching product sales in 2013, we have experienced significant annual sales growth.

Our mission is to provide products to the building and home improvement communities that are innovative, of superior quality derived in part from enlightened creativity for our end users while enhancing performance, improving well-being and building high brand loyalty.

Additional information about the company is available at: toughbuilt.com.