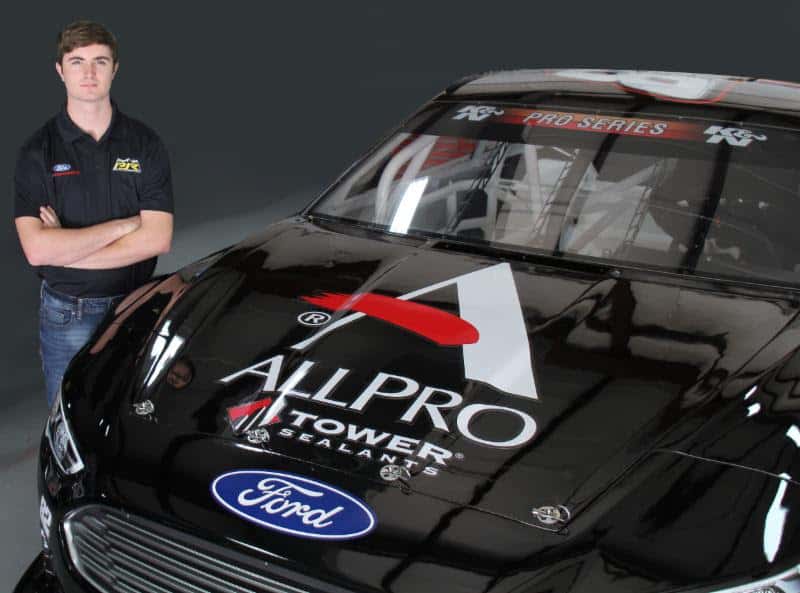 Monday night’s K&N Pro Series East opener gave Davis and co-owner and crew chief Mark Rette an opportunity to work together and while neither were completely satisfied with their performance, the finish does give them extra motivation heading into the NASCAR Gander Outdoors Truck Series (NGOTS) opener on Feb. 15.

“I’m really appreciative of my Rette Jones Racing team,” said Davis. “It’s been a brutal couple of weeks trying to get ready for both the K&N race and the Truck race. Now that we have one race behind us, we can turn total concentration over to the truck and see what we can deliver.”
Davis’s efforts for Daytona will continue to be supported by ALLPRO and Tower Sealants.
ALLPRO Corporation is a business-to-business purchasing cooperative comprised of a network of independently owned paint and decorating product retailers.

They serve over 280 such member retailers who represent approximately 1,400 storefronts located throughout the United States, Canada, Mexico and parts of Europe.

“This is great exposure for our sponsors, especially on a national platform,” added Davis. “We kept ourselves near the front at the end of the K&N race – but hopefully we can qualify our No. 82 ALLPRO | Tower Sealants Ford near the front and stay in the hunt for all 100 laps.”

The Dawsonville, Ga. native will attempt to make his sixth NGOTS start on Friday night and is eager to duplicate his seventh-place outing with Kyle Busch Motorsports from last February.

“It’s going to be a tall task to duplicate what we did last year,” added Davis. “It’s a much more competitive field this year compared to last – but we’re staying positive and have a plan of attack. Mark (Rette) is super smart when it comes to setup and strategy. Once we get into this race, it will be all about avoiding the “Big One” and just being around in the end when it counts most.”

Crew chief and co truck-owner Mark Rette knows Daytona is always a tough challenge – but a task he knows they can conquer.

“We’re ready and we’ll go there and give nothing less than 100 percent,” added Rette. “We did OK at New Smyrna. It was a solid start to the year – I think we just got a little behind as far as track position. As for Daytona, it’s another beast.

“It’s going to be a close race to make on speed and we gotta be in the top-27. We’ll just see what happens. We have a dedicated bunch, a talented driver and great partners like ALLPRO and Tower Sealants, hopefully, all those mixed together can bring a good result on Friday night.”

Davis, 20, also has five NASCAR Gander Outdoors Truck Series (NGOTS) starts to his credit – all in 2018 driving for Kyle Busch Motorsports (KBM). He earned two top-10 finishes including a career-best of seventh in his series’ debut at Daytona (Fla.) International Speedway.

The team also offers technical and setup intel as part of a technical alliance program.