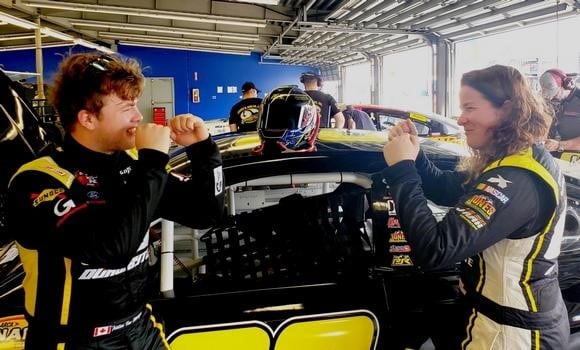 Overall, Dominique Van Wieringen is planning to compete in a number of ARCA Menards Series races, while Tristan is set to return to the East Series and run for the series’ championship in 2020.

“I’m really excited about getting this opportunity to compete at Daytona for Rette Jones Racing,” said Dominique Van Wieringen, a veteran of ARCA East competition. “As we proved last month, we have a really fast race car and I can’t wait to get on the track and showcase that speed once again and have the opportunity to race for a win in my ARCA debut.

For Tristan Van Wieringen, he’s excited to return to the ARCA East Series after a brief sabbatical and is eager to chase a championship for Rette Jones Racing on the heels of the Mooresville, N.C.’s career-best year in the regional development series.

“2020 is going to be a lot of fun and obviously a big year for the Van Wieringen family,” offered Tristan Van Wieringen. “I’m very happy for my sister on elevating her racing career in ARCA while I get a chase to run for wins and chase a championship in the East Series with Mark.

“I think Rette Jones Racing proved a lot during the last half of the season last year and I’m eager to pick up where they left off. New Smyrna should be a lot of fun on Monday night.”

While the racing styles will differ completely for the brother and sister rivalry, both plan to cheer each other on both on and off the track.

“Tristan has always been my number one fan and vice-versa,” added Dominique Van Wieringen. “Daytona is probably going to be the biggest race of my career and I’m thankful he’ll be there to support me. It’s a big stage where everyone is eager to perform but I think everyone will see that we are a determined bunch from top to bottom and we hope to be in Victory Lane a lot this season.”

For 21-year-old Tristan, he hopes to earn a career-best in East Series competition on Monday night.

“I think the East Series is going to be a stiff series this year,” he said. “I know there isn’t as many races – but that doesn’t mean the competition is going to slack any. I learned a lot in my seven races in 2018 and I just need to capitalize on that in a big way starting on Monday night.

“If we can do that – then we can move forward with some momentum and look forward with nothing but positivity.”

DuroByte, a leading provider of innovative electronic design, build and manufacturing will also double down its support in 2020 and support Tristan Van Wieringen too.

“2020 is going to be busy for Rette Jones Racing, but I’m ready,” said team co-owner Mark Rette. “This is a unique situation having both Dominique and Tristan race for Rette Jones Racing. Both are extremely talented and are keen on delivering results. I think we’re going to win some races, but also have a lot of fun too.”

The Skips Western Outfitters 150 (150 laps | 150 miles) is the first of eight races on the 2020 ARCA Menards Series East schedule. The season-opener is set to take the green flag on Mon., Feb. 10 shortly after 7:30 p.m. The event will be televised live on NBC Sports’ TrackPass, while ARCARacing.com will stream live timing and scoring throughout the day’s festivities.