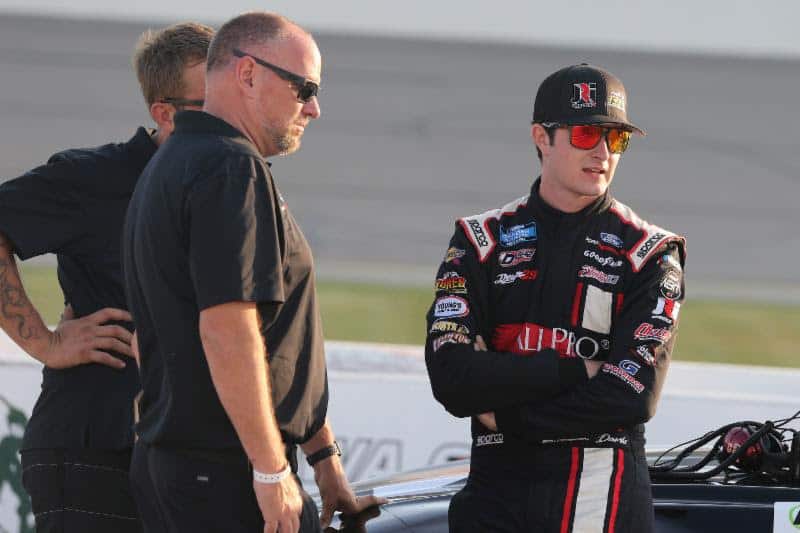 LAS VEGAS, Nev.: One of the hottest duos in the NASCAR K&N Pro Series East is headed back to the NASCAR Gander Outdoors Truck Series (NGOTS).

On the heels of winning their first K&N East race together last month at World Wide Technology Raceway at Gateway, Rette Jones Racing and driver Spencer Davis trek to Las Vegas (Nev.) Motor Speedway with momentum on their side for Friday night’s World of Westgate 200.

Of course, RJR or the 20-year-old Davis didn’t need the momentum of their K&N East triumph at Gateway to carry them to Sin City. After all, the team performed magnificently in their most recent Truck Series race at Kentucky Speedway in July – where the team finished eighth in their second Truck Series event of the season.

With tons of confidence on their side, the pair heads to Las Vegas looking to double down and deliver back-to-back top-10 performances.

“I’m really proud of my Rette Jones Racing team,” said Davis. “We had a great finish at Kentucky Speedway in the Truck Series and were able to build on that confidence over to our K&N program, especially at Bristol Motor Speedway and then at Gateway where we brought home the checkered flag.

“Of course, it’s important for us not to get overconfident. These Truck Series races are though, especially in the Playoffs. I expect a competitive field on Friday night and we just need to take the same approach as Kentucky and hope it delivers us another good finish.”

The biggest benefit of the team’s approach at Kentucky was not beating themselves on the race track. Knowing Las Vegas is expected to be an intense race, Davis says their strategy throughout the day will be identical.

“We’re expecting a lot of trucks, so we need to make sure we have a good balance during practice and lay down a good lap in qualifying to make sure we’re in the show. From there, it’s just making laps – making sure we’re keeping up the adjustments and being around for the end to fight.

“I don’t get a lot of opportunities to run these Truck Series races, so I appreciate Mark (Rette), the guys and all our sponsors for allowing Las Vegas to happen.”

Davis, a native of Dawsonville, Ga. efforts behind the wheel of the No. 11 truck for Las Vegas will be supported by ALLPRO Corporation and Tower Sealants.

Rette is just as enthusiastic about returning to the Truck Series tour this weekend.

“The morale is really good lately at Rette Jones Racing,” offered Rette. “Everyone’s been working really hard because we want more checkered flags. We’re going to Las Vegas poised to win, but if we can’t – we hope to come out of there with a good finish that will allow us to build our program for the next truck race before the end of the season.

“Spencer is doing a really good job right behind the wheel and I don’t expect anything different on Friday night.”

Following Las Vegas, Rette Jones Racing shifts their attention for the penultimate NASCAR K&N Pro Series East race of the year in a return trip to New Hampshire Motor Speedway (NHMS) for the running of the Apple Barrel 125 on Sat. Sep. 21, 2019.